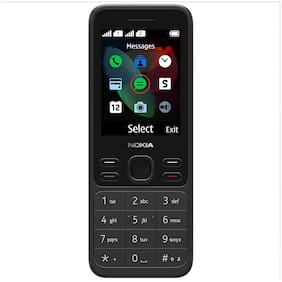 Nokia, a Finnish company, based at Espoo, Helsinki started its operations in 1865 with a pulp mill. Between 1990 and 2000, Nokia rose to become the world’s leading manufacturer of mobile phones. Its major contribution towards telecommunication has been its role in developing GSM, 3G and LTE technologies. By 1998, Nokia became the best seller for mobile phones and one of the main reasons for its growing popularity was the ‘Snake’ game that was pre-loaded in a few of the models of Nokia mobile phones. If you are looking to buy a Nokia feature phone online, then, Paytm Mall is all you need to explore. Yes, Paytm Mall brings to you the widest collection of Nokia feature phones available at the best prices online. Nokia feature phones are known to be the most reliable phones packing a number of useful features that too at amazing prices.

Nokia 105- One of the best basic phones belongs to Nokia and is available at the cheapest price possible. It is Nokia 105 with single and dual SIM. Tiny looking and very handy, it fits handsomely in the palm. Some of the best features of the Nokia 105 handset include strong battery back-up, sturdy built, polycarbonate cover, Island key mat for easy texting and dialling, flashlight, pre-loaded games, clear display and so on.

Moreover, the phone once charged by an 800 mAH lithium-ion battery, it will last for 15 hours of talk time or a month on standby. It comes with a 4 MB RAM and ROM. The phone has a 1-year warranty for device and 6 months’ warranty for in-box mobile accessories including battery. The Nokia base phone price in India is quite low for the model Nokia 105. It is also loaded with the Nokia Snake Xenzia game. With a curve, the body has been designed ergonomically and island key for easy dialling and texting.
Some of the commonly sold Nokia Feature phones are Nokia 150 Dual SIM and Nokia 216 Dual SIM. Characteristic features of these two models are:

Both these models are advisable for elderly people because of their ease of operation, low cost, handy make, highly quality of ringtones.

Nokia 130 and 150 Series - The Nokia 130 and 150 series are also part of Nokia basic phones. The 130 series has a primary camera of 0.3 mega pixel, a 4.57 centimetres screen with 4MB RAM and 8 MB ROM. It has dual SIM slots and powered by a 1020 mAH battery. The 150 series has a VGA camera and the phone has an impressive 2.4 inches screen. It is powered by a removable Li-ion 1020 mAh battery. At Paytm Mall, you will come across the finest Nokia phones available online that too at interesting Cashback offers and discount deals.

Nokia 3310 - The Nokia 3310 is another Nokia keypad phones that has been extremely popular amongst the users. The 3310 series of Nokia basic phone is considered to be the epitome of mobile handsets because of its unique interchangeable cover feature. It has a sturdy built so much so that even when it is hurled accidentally there will be no scratches leave alone any chances of the device breaking down.

The new Nokia 3310 was re-launched in 2017 as Nokia feature phone rather than a smartphone. It is characterized by a full colour screen, slimmer than the original handset, 16 MB internal memory and extendable RAM to 32 MB. The phone packs a 2 megapixel camera, 1-year manufacturer warranty, 7.36 cms size, 1000-2000 mAH battery, flashlight and FM Radio. This model too is highly suitable for the older generation who find it difficult to understand the handling of a smartphone. Its tough body gives it an edge over the other models as chances of breakage are minimal.

Overall, Nokia feature phones have one of the most robust bodies powered by strong batteries that have the highest talk time capacity.

At Paytm Mall, you will come across the widest range of Nokia feature phones priced at various price points. You can shop with us anytime and from anywhere without spending much of your time & energy. Paytm Mall is India’s biggest online marketplace offering some of the most lucrative & incredible online shopping deals and Cashback offers to make your online shopping experience extremely cost-effective & gratifying.

When buying a Nokia feature phone from Paytm Mall, you will be in for a surprise. Not only they are available at low Nokia basic phone prices, there are also additional discount percentages and rewards applicable if you make payments via credit & debit cards of certain banks. There are also offers like Cashback deals on purchase of a certain value, free deliveries, money-saving offers and so on. Get yourself the Nokia feature phone and have a sturdy backup available at all times!